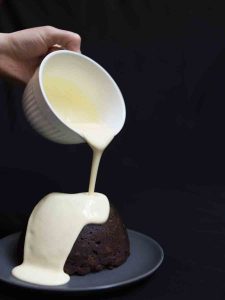 Lunch is over. Whether it was a traditional but unseasonal roast with veggies, or the Aussie classic of “cold meat and salad”, your Uncle’s famous (but charred) BBQ, or, if you are very fancy, a seafood fiesta, you are now completely and deliciously full. With any luck, there has been an opportunity to dispose of the too-big tissue paper hat that you were forced to adorn yourself with when the crackers were pulled several hours ago. (Hot tip, find a child who has lost theirs so you can get rid of the hat *and* be a hero.) The beautifully wrapped presents from under the tree are now nothing more than a pile of crumpled paper for the recycling. But there is still one thing missing from the perfect Christmas Day – the pudding.

Christmas puddings are one of the most iconic additions to the festive table that we have been gifted by the British Empire. (Fruit Mince Pies are obviously firmly in second place!) The traditional recipe has evolved from a stew containing meat, to a firm “pudding” that still contained meat and was encased in stomach or intestines, to a plum pudding, with just a garnish of meat, to the herbivorous version we know today. This was made very popular in the 1920s with the release of the Royal Family’s official pudding recipe, a political masterpiece containing ingredients from all the colonies, including nutmeg from the West Indies, apple from Canada, and currants from Australia. Here at Perryman’s, we try and source almost all our ingredients locally, but we do still include a very generous dash of Caribbean rum!

Now of course, there are those who prefer a pavlova, a trifle, or even the very modern who will try a Christmas themed ice cream cake for the occasion. But those of us who truly understand the spirit of Christmas know that all of these are just additional desserts, the support acts to the main event.

Of course, the pudding itself is not without its own controversies. Is it really Christmas Day unless someone has an argument over whether ice cream or cream is the appropriate accompaniment to the pud? Of course, the answer is both, and the real villain is anyone who doesn’t provide custard to pour over the top! A less black and white question is whether or not you will attempt the flaming brandy trick. It is impressive if done well, but in South Australia, Christmas Day can easily be a day of extreme fire danger, so please, do be sensible if dining outdoors!